Fazendas Dutra are a group of 10 farms located in the Matas de Minas region in the state of Minas Gerais, Brazil. In the beginning of the 50’s José Dutra planted the first coffee trees on his small farm and by 1999 when the farm was passed down to his children Walter and Ednilson, it already consisted of 300 hectares of planted coffee.

Today the group of farms comprise 1000 hectares of which 750 are dedicated to producing specialty coffee. Due to the mountainous nature of Matas de Minas all coffee on the farm is hand-picked which allows for greater selectivity and uniformity than other regions in Brazil which use mechanical harvesting practices.

The average production of the farms is 35 bags per hectare and they employ 50 permanent employees, 250 employees in between harvests and around 600 employees during the peak of the harvest. The farms are certified by BSCA, Utz, Rainforest Alliance, 4C, Certifica Minas and USDA NOP. Since 2000, the farm has won over 85 awards including quality awards as well as sustainability awards, notably 2nd Place in the Globo Rural 2015 Sustainable Farm Prize which included all farms in Brazil across a sector of agricultural products.

Fazenda Dutra is involved in a number of philanthropic acitivities which include having a school on the farm for local residents who live close by and a Family Health Program which includes visits by a medical team to the farm.

In 2015 Fazendas Dutra installed the first de-pulper in Brazil powered entirely by Photovoltaic Solar Energy. A total of 51 modules were installed, generating an average of 18,400 kW / year. The next step of the project will be to generate enough energy to power the coffee dryers and other farm machinery. 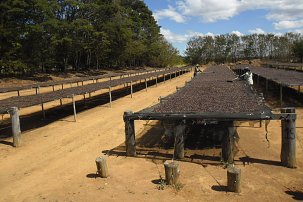