Victor began as a coffee picker for several farms in the Corquin area. During that time that he became interested in coffee production, so he planted coffee in a hectare of land his family owned. He became very successful in the microlot production and has been able to buy 2 more hectares to increase his production. Victor has been very careful to take care of his crop to get the best qualities possible and this has helped him become more profitable. His goal for the new season is to keep working on perfecting the quality of the microlot coffees he produces 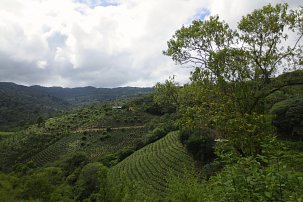