Coffee has been grown in Bali since the early nineteenth century when traders from the Dutch East India Com­pany brought coffee from Yemen via Java to Bali. Similar to many islands in Indonesia; both Arabica and Robusta are grown, depending on elevation.

The island’s main Arabica growing area lies between the active volcanoes of Mount Agung and Mount Batukaro. Harvest is from May to June and in contrast to Sumatra, there is only one harvest per year. The area of Kintamani is synonymous with the island’s Arabica

pro­duction and the Kintamani Highlands are generally considered to be the home of the best coffee Bali has to offer. On altitudes ranging from 1,100 to 1,500 MASL, coffee is grown under shade trees, frequently intercropped with tangerines.

All Kintamani Arabica is produced by traditional farmer organizations called Subak Abians that democratically manage religious, economic and social life in the villages. Farmers follow the Hindu Tri Hata Karana philosophy as a guiding prin­ciple to establish harmonious interactions between humans and the gods (Parahy­angan), among humans (Pawangan), and between humans and their environment (Palemahan).

Islands of Sumatra and Java as well as Flores, Bali, Sulawesi 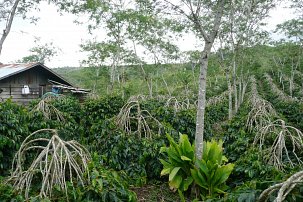